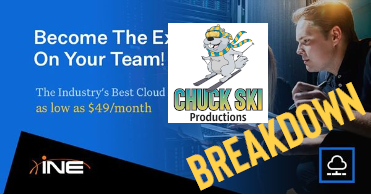 Last week I looked at an ad from the 1950s. Today I return to the present and look at a Facebook ad that appeared atop my search in Facebook for "online IT courses." It comes from the company INE.

Here is the ad:

The "Be Cool" Benefit Headline

The headline in the image smartly appeals to the universal need to be cool among your peer by promising to make you the expert on your team. They then state their unique selling point of being "The Industry's Best Cloud Training." But is it an accurate statement? I gather it at least creates enough curiosity in someone looking for cloud training to click the ad and see if they can prove it.

"The Power of the Number 9" Price

They then show the cost but advertise it as a benefit since it is "as low as $49/month." They use the psychological pricing of "The Power of the Number 9" at the end of the price. Ending in 9 gives the impression that there is high value, but it comes with cost savings. It seems like something in the 40s and not the 50s.

The amount of text in the image nearly violates the old Facebook ad rule of 20% or less of the image having words. But Facebook quietly removed this restriction about a month ago. They used to have a text overlay tool to test your ad image to make sure it complied.

The tool is gone and replaced with a note that there is no restriction anymore. It used to be at https://www.facebook.com/ads/tools/text_overlay, but that link takes you to a page with this: Note: There is no longer a limit on the amount of text that can exist in your ad image. The text overlay tool is no longer available.

This further increases the importance of copywriting in Facebook ads. You can now fill your image up with words that get prospects to click. It will be interesting to see how Facebook ads change as advertisers realize this change.

The image seems serviceable if not eyecatching. I would recommend branding the "Cloud Pass" logo in the bottom right by adding text to it. If that logo is well-known in their target market they could go with only the logo. I would also include some explanatory text after the $49/month line along these lines: "with Cloud Pass."

The ad headline (above the image) starts with a clever twist on a familiar question with "Is your head in the Cloud?" With cloud computing so critical today, many IT pros deal with digital clouds so much it is in their heads all the time, perhaps even their dreams and nightmares! This first sentence might not grab a prospect's attention and get them to keep reading and get them to click the "Learn More" button, though. This headline could have also mentioned the product's name as being "Cloud Pass."

The Headline's Benefit is "a career in Microsoft Azure," but why is that a benefit?

Change the Call-To-Action from "Learn More"

The section below the image lists the webpage you'll go to and reinforces the training features. It also mentions training for AWS and Google Cloud. Here is another opportunity to say, "Cloud Pass." The call-to-action button is "Learn More," which seems like the best choice among Facebook's default options. But the word "learn" often carries a negative connotation. It evokes the drudgery of school, homework, and anxiety-inducing tests. I would use one of these instead: "Explore More" or "Discover More."

One final note, the ad has been running since September 23rd, 2020. That is nearly two months, which is quite good in the world of Facebook Ads. It must be converting. You can find this and other information from the Facebook Ads Library (search that term to find it). But I would recommend trying my tweaks as a variation to test against this ad. INE could also come up with 2-4 more variations of the above-the-image headline. At least one of those could provide even better success.

We use cookies on our website to give you the most relevant experience by remembering your preferences and repeat visits. By clicking “Accept”, you consent to the use of ALL the cookies.
Do not sell my personal information.
Cookie settingsACCEPT
Manage consent

This website uses cookies to improve your experience while you navigate through the website. Out of these, the cookies that are categorized as necessary are stored on your browser as they are essential for the working of basic functionalities of the website. We also use third-party cookies that help us analyze and understand how you use this website. These cookies will be stored in your browser only with your consent. You also have the option to opt-out of these cookies. But opting out of some of these cookies may affect your browsing experience.
Necessary Always Enabled

Performance cookies are used to understand and analyze the key performance indexes of the website which helps in delivering a better user experience for the visitors.

Analytical cookies are used to understand how visitors interact with the website. These cookies help provide information on metrics the number of visitors, bounce rate, traffic source, etc.

Advertisement cookies are used to provide visitors with relevant ads and marketing campaigns. These cookies track visitors across websites and collect information to provide customized ads.

Other uncategorized cookies are those that are being analyzed and have not been classified into a category as yet.